In 1978 ,Dipankar Adhya , while on an assignment from M/s. Voltas Ltd, met with an accident and lost his right arm from above elbow. However with his indomitable determination he developed his left hand writing and completed and acquired all his post graduate qualification in the course of time.

Mr.Dipankar Adhya due to his original work on Jute Machinery developments stared his career with Jute Industry and then with Machinery Manufacturers Corporation Ltd (MMC) and then with Voltas Ltd (Textile Machinery Divn.) in their Marketing Department in different capacities. Finally He worked as a Corporate Planner in M.M.C Ltd from 1982 to 1988.

He established ADHIACON in 1988 to provide a after sales service backed marketing support to a number of medium scale Textile Machinery Manufacturers from South and Western India for marketing their product in Eastern India and Bangladesh .

He received the awards for his contribution to the development of Small and medium scale Industries and also an export award from ICSME New Delhi. for his organisation. Some of his original work on Workers Comfort zone creation and Hydraulic Oil Cooler and Chilling unit are well appreciated in the industry.

Due to his deep involvement in the Rotary International activities especially Community Services since early 1991,brought him closer to the sufferings of the people especially from drinking unsafe and unhygienic water, and since then Dipankar relentlessly working in the direction of providing safe drinking water to the people in the affected / drinking water scared area and organizing health Check up and medical camps

Due to his inclination towards Environment Protection and “Serving the Needy” draws him to the problem of Arsenic Poisoning of ground water in Bangladesh where millions of people under risk from this biggest environmental disaster in the history. Since then Dipankar devoted in the R & D on Arsenic Mitigation. He organized field testing of large number of tube-wells in West Bengal and Bangladesh. & a number of Awareness camps in Bangladesh & in India.

Finally he developed one of the most Users friendly community based Arsenic Mitigation System for removing of not only Arsenic but a host of other contaminants from water which are appreciated by many professionals and researchers from India and abroad. His development will save millions of people at risk from Arsenic Poisoning and becoming physically, mentally and socially disable and slow death due to cancer of Internal Organ and Skin.

His unique system is equally beneficial and applied in producing 100% safe drinking water for the community and also in Waste Water Treatment to provide high standard of Effluent discharge from the industry thus saving Environment and huge cost towards conventional effluent treatment.

Dipankar always worked selflessly for the poorest of the poor and needy and this brought him closer to Blessed Mother Teresa. 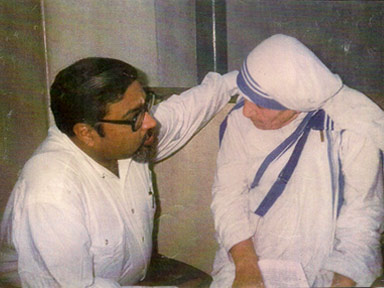 Dipankar was awarded “Crest of Honor” for his contribution in World Understanding & Peace by Foreign Minister of Peoples Republic of Bangladesh Hon’ble Janab Mustafijur Rahman in 1995 in a ceremony organised by Rotary International Dist 3280.